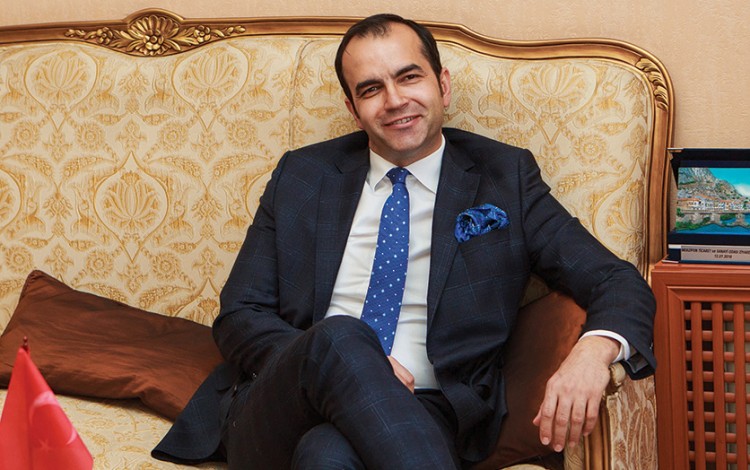 Anyone engaged in Turkish-Ukrainian business relations will likely have encountered Burak Pehlivan. As Chairman of the Turkish-Ukrainian Business Association TUID, forty-one-year-old Pehlivan is a well-known and high profile member of Ukraine’s international business community who has been tireless in his efforts to help build business bridges across the Black Sea.

Under his stewardship, TUID has emerged as one of Ukraine’s largest and most active international business associations, winning numerous international awards and expanding in line with the impressive growth of the Turkish business community in Ukraine. He sees clear parallels between Ukraine’s current situation and Turkey’s own economic evolution over the past few decades, and believes the untapped potential that first attracted him to Ukraine continues to offer exciting opportunities for the Turkish business presence in the country to develop further.

Pehlivan’s initial introduction to Ukraine came during the mid-2000s and was part of a wave of expansion as a new generation of Turkish businesses looked to enter Central European and former Soviet markets. When he decided to establish his own business towards the end of the decade, Ukraine seemed a logical choice. Since relocating to Kyiv in 2009, Pehlivan has spent the past ten years in the Ukrainian capital.

His involvement in the wider world of Turkish-Ukrainian business relations originally stemmed from his enthusiasm for Ukraine, which led to him becoming a prolific and groundbreaking blogger about the country. “All in all, I wrote over 1,500 blogs for the Turkish media about different aspects of life in Ukraine,” he recalls. “In many cases, I was the first person ever to write about these subjects in Turkish.”

The recognition this brought eventually resulted in an invitation to become involved with TUID, paving the way for his election as Vice Chairman of the organization in 2011. Pehlivan says he no longer has enough free time to keep up his blogging career, but he maintains a strong social media presence with thousands of followers on Facebook, Instagram, YouTube, Twitter and LinkedIn. These platforms have allowed him to consolidate his position as one of the public faces behind Turkey and Ukraine’s strengthening economic ties.

The Turkish business community in Ukraine has experienced considerable growth since 2014, with numerous new investments coming at a time when many Western businesses have continued to adopt a “wait and see” approach towards the changes taking place in post-Maidan Ukraine.

Pehlivan believes there are a number of factors that have helped Turkish businesses to feel at home in Ukraine, not least the similarities with their own experiences. He points to the parallels between today’s Ukraine and Turkey during the transitional years of the 1990s and early 2000s, when the country faced challenges that would be all-too-familiar to Ukrainian audiences, including perceptions of widespread corruption, rule of law issues, and a lack of international business experience.

The signing of a customs union agreement with the EU in the mid-1990s proved to be a pivotal moment in modern Turkey’s emergence as an economic success story, but Pehlivan stresses that many in the Turkish business community were initially skeptical over the move, fearing that they would not be competitive enough. The changes that this EU customs union helped facilitate meant that when Ukraine reached its own watershed moment in 2014, Turkish businesses were in a position to take advantage of the new opportunities presenting themselves, while also being relatively unaffected by the transitional turbulence that put so many others off. “Turkish companies were ready in 2014 and had the appetite to enter Ukraine. Over the previous fifteen years, they had become competitive internationally and gained valuable experience. Ukraine was a good fit at the right time.”

Pehlivan estimates that Turkish investments in Ukraine since 2014 total around USD 1 billion, while annual trade between the two countries topped USD 4 billion in 2018. He talks of a “golden age” in Turkish-Ukrainian business relations, and speaks of the growing Turkish presence in diverse sectors of the Ukrainian economy ranging from renewable energy to retail.

As economic ties strengthen, there are other signs of a closer bilateral relationship. The two countries concluded a landmark agreement in 2017 whereby Turkish and Ukrainian citizens can visit each other’s countries using internal identification documents rather than international passports. One and a half million Ukrainians visited Turkey in 2018, while around 300,000 Turks came to Ukraine. “I can recall a time before daily flights. Now there are more than 200 flights between Ukraine and Turkey every single week,” Pehlivan observes.

With Ukrainians and Turks increasingly in contact with each other, perceptions about Ukraine are evolving. “Five or six years ago, I would still encounter people within the Turkish business community who thought Ukraine was essentially like Russia. Now there is growing recognition of how different the two countries are, and of the dramatic changes that are taking place in today’s Ukraine. Personal experience plays a big role in this process. When people come to Kyiv, for example, they quickly appreciate that Ukraine is part of Europe, not only geographically but also culturally and socially.”

The biggest issue on the bilateral agenda remains a free trade agreement. This potential Turkey-Ukraine FTA has been years in the making and is tantalizingly close to conclusion, with politicians from both countries repeatedly stating that it will be signed in the near future. The last remaining sticking points revolve around certain strategic areas and specific industries, but Pehlivan is eager to focus on the bigger picture of what the FTA could mean for trade volumes as a whole. He argues that a free trade deal with Ukraine could have a similarly positive effect on the Turkish economy as the 1990s customs union with the EU, albeit on a smaller scale. The results will be beneficial for both countries, he stresses. “We need free trade in order to boost overall trade. We do not want to eat all the cake. We want to make the cake bigger.”

Burak Pehlivan was interviewed by Peter Dickinson, editor-in-chief and publisher of Business Ukraine