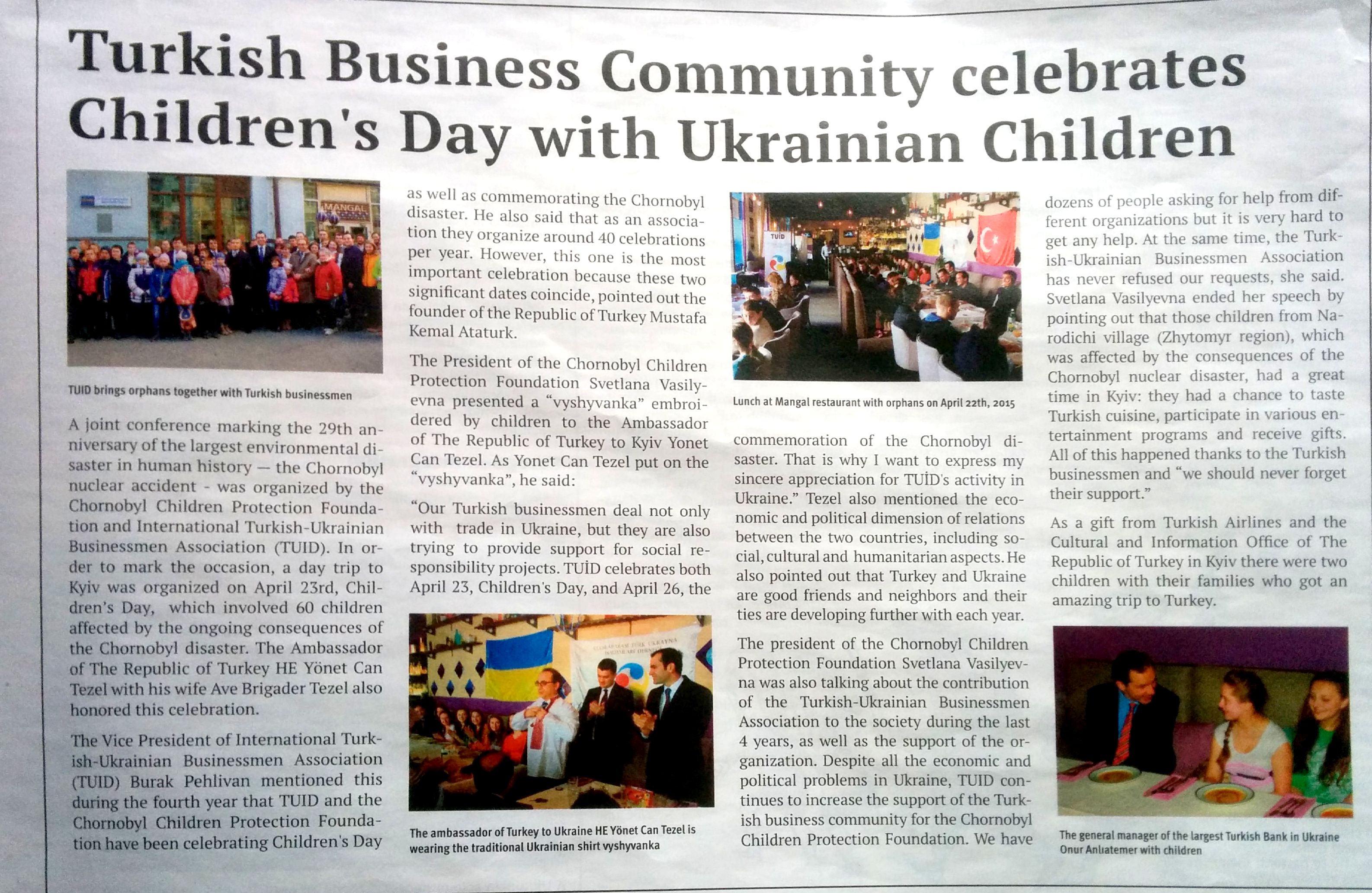 With regard to the 29th anniversary of the largest environmental disaster in human history the Chernobyl nuclear accident there has been held a joint organization of Chernobyl Children Protection Foundation and International Turkish-Ukrainian Businessmen Association (TUID) in Ukraine’s capital Kiev. In this context, for 60 children affected of the extending consequences of the Chernobyl disaster, was organized a day trip to Kiev and on April 23 World Children’s Day was also celebrated. The Ambassador of Republic of Turkey to Kyiv HE Yönet Can Tezel with his wife Ave Brigader Tezel also honored this celebration.

Delivering the opening speech Vice President of International Turkish-Ukrainian Businessmen Association (TUID) Burak Pehlivan, mentioned that the last 4 years with Chernobyl Children Protection Foundation they have been celebrated the 23rd of April the Children’s Day and 26th of April to commemorate the Chernobyl disaster. He also said that as an association they held around 40 celebrations per year, but only this celebration is the most important one because as well as the commemoration of 26th of April the Chernobyl disaster, they also celebrate with Ukrainian children the 23rd of April the Children’s Day, which importance pointed out founder of the Republic of Turkey Mustafa Kemal Ataturk.

President of Chernobyl Children Protection Foundation Svetlana Vasilyevna presented to the Ambassador of Republic of Turkey to Kyiv Yonet Can Tezel the “vyshyvanka” embroidered by children’s hands. Yonet Can Tezel kindly wore the “vyshivanka” and said:

“Our Turkish businessmen deal not only with the trade in Ukraine, they are trying to provide support in social responsibility projects. In this context, TUİD celebrates both the 23rd of April the Children’s Day and 26th of April it commemorates the Chernobyl disaster and that is the reason why I want to express my sincere appreciation for TUİD`s activity in Ukraine”. Tezel, as well mentioned economic and political dimension of relations between the countries, social, cultural and the humanitarian dimensions, also he pointed out that Turkey and Ukraine are good friends and neighbor countries whose relations develop further more each year. President of Chernobyl Children Protection Foundation Svetlana Vasilyevna said about contribution of Turkish-Ukrainian Businessmen Association that formed and during 4 years has supported this organization, also despite all the economic, political problems in Ukraine, it continues to increase the support to her foundation from Turkish business world. We have dozens of people asking for help from the different organization, but it is very hard to get any help. At the same time Turkish-Ukrainian Businessmen Association has never refuse our demands, she said. Svetlana Vasilyevna ended her speech pointing out that those children from Narodichi village (Jitomir region) affected of the extending consequences of the Chernobyl nuclear disaster have a great time in Kiev, they taste Turkish cuisine, participate in various entertainment programs and still receive different gifts, they’re all here thanks to Turkish businessmen and “we will never forget them”, she ended her words.

There were 2 children and their families who got as a gift an amazing trip to Turkey under the support of Turkish Airlines and Culture and Information office of Republic of Turkey in Kyiv.