Turks contribute the future of Ukraine 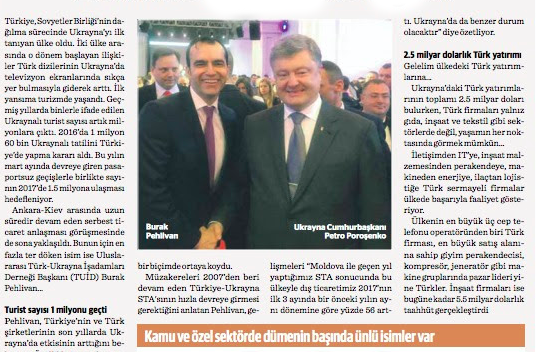 Turkish investments in Ukraine total around $2.5 billion and Turkish executives lead the public and private sectors in the country

Turkey was the first country to recognize Ukraine during its process of independence from the Soviet Union. Relations between the two countries, which started back then, increased steadily as Turkish series frequently appeared on Ukrainian television. This relationship was first reflected in tourism. The number of Ukrainian tourists, who had previously come in their thousands, recently reached millions. In 2016, 1.06 million holidayed in Turkey. Now, with the passport-free transitions that were introduced in March this year, the aim is to reach 1.5 million in 2017.

The long-standing free trade deal talks between Ankara and Kiev have come to the end – and the man who sweated the most over the deal was International Turkish-Ukrainian Businessmen Association President (TUID) Burak Pehlivan.

Pehlivan says that Turkey and Turkish companies have become more effective in Ukraine in recent years, especially since the political crises with Russia.

According to Pehlivan, until five years ago when 35-40% of Ukraine’s total foreign trade was being conducted with the Russian Federation, this rate has now dropped to 10%. At one time, Ukraine was buying 40 billion cubic meters of natural gas a year from Russia, but Ukraine has not purchased any gas from Russia for more than 500 days. Russian banks, too, are rapidly losing their share of the Ukrainian banking system. As the country’s economic and political relations with the West are rapidly strengthening, its trade, finance and energy ties with its northern neighbour are weakening even more rapidly. While the Free Trade Agreement (FTA) between Ukraine and Russia was canceled, Ukraine signed an FTA with the European Union on Jan. 1, 2016 and with Canada in July 2016. In the same way, the EU has recently and clearly shown its support to this country by removing the need for Ukrainian citizens to get visas to enter the EU.

Pehlivan said Turkey-Ukraine Free Trade Agreement (FTA) negotiations had been ongoing since 2007 and should now quickly be implemented. He added: “As a result of the FTA signed with Moldova last year, our foreign trade with Moldova is 56% higher in the first three months of 2017 compared with the same period last year. It will be a similar result with Ukraine too.”

One of the three largest cell phone operators in the country is Turkish and the Turks have the biggest sales area in ready-to wear retail. Turks are also market leaders in machinery groups such as compressors and generators – and Turkish construction companies have made a commitment of $5.5 billion to date.

Famous names at helm of public and private sector

The Ukrainian government had led former Banking Regulation and Supervision (BRSA) Chairman Engin Akcakoca to the position of chief of the International Monetary Fund (IMF). Akcakoca is now trying to resuscitate PrivatBank, the country’s largest financial institution, which was nationalized in late-2016. The general manager of Ukraine at the European Bank for Reconstruction and Development (EBRD), which is the largest foreign investor in the country with 5.4 billion euros, is also a Turk: Sevki Acuner.

The president of the Organization for Security and Co-operation in Europe’s (OSCE) Special Monitoring Mission to Ukraine, which observes developments in the eastern part of Ukraine, is Ertugrul Apakan, a former undersecretary of Turkey’s Ministry of Foreign Affairs.

Global companies such as Coca-Cola, Pfizer, Hilton, Colgate, P&G, GSK, Unilever, Gillette, Schneider, BASF, Henkel are also managed by Turks. Pehlivan describes how Turks are important in the business world in Ukraine with the following words. “All these Turkish professionals in Ukraine are giving great power to the economic activity of our country, hence in the past two months Ukrainian Prime Minister [Volodymyr] Grosyman twice met with Turkish businessmen and investors in Ukraine who also three times met with Prime Minister’s First Vice-President [Stepan] Kubiv.”