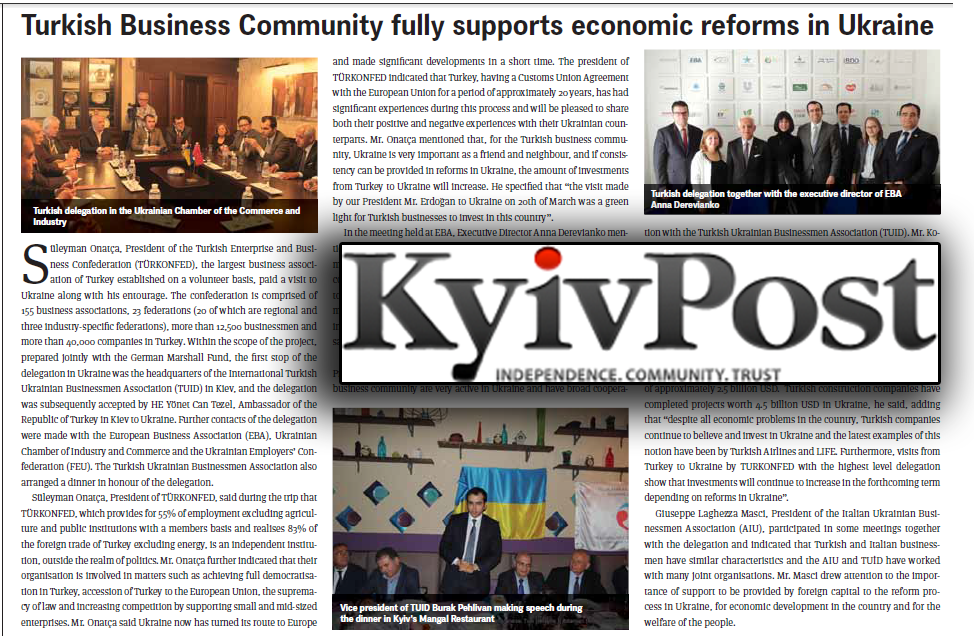 Süleyman Onatça, President of the Turkish Enterprise and Business Confederation (TÜRKONFED), the largest businessmen association of Turkey established on volunteering basis and the members of which consist 155 businessmen associations, 23 federations, 20 of which regional and 3 industry-specific federations, more than 12.500 businessmen and more than 40 thousand companies in Turkey, along with his entourage, paid a study visit to Ukraine. Within the scope of the project prepared jointly with the German Marshall Fund, the first stop of said delegation visiting Ukraine, was the headquarters of the International Turkish Ukrainian Businessmen Association (TUID) in Kiev and the delegation was subsequently accepted by HE Yönet Can Tezel, Ambassador of the Republic of Turkey in Kiev to Ukraine. Further contacts of the delegation were made with the European Business Association (EBA), Ukrainian Chamber of Industry and Commerce and the Ukrainian Employers’ Confederation (FEU). The Turkish Ukrainian Businessmen Association also arranged a dinner in the honour of the delegation. 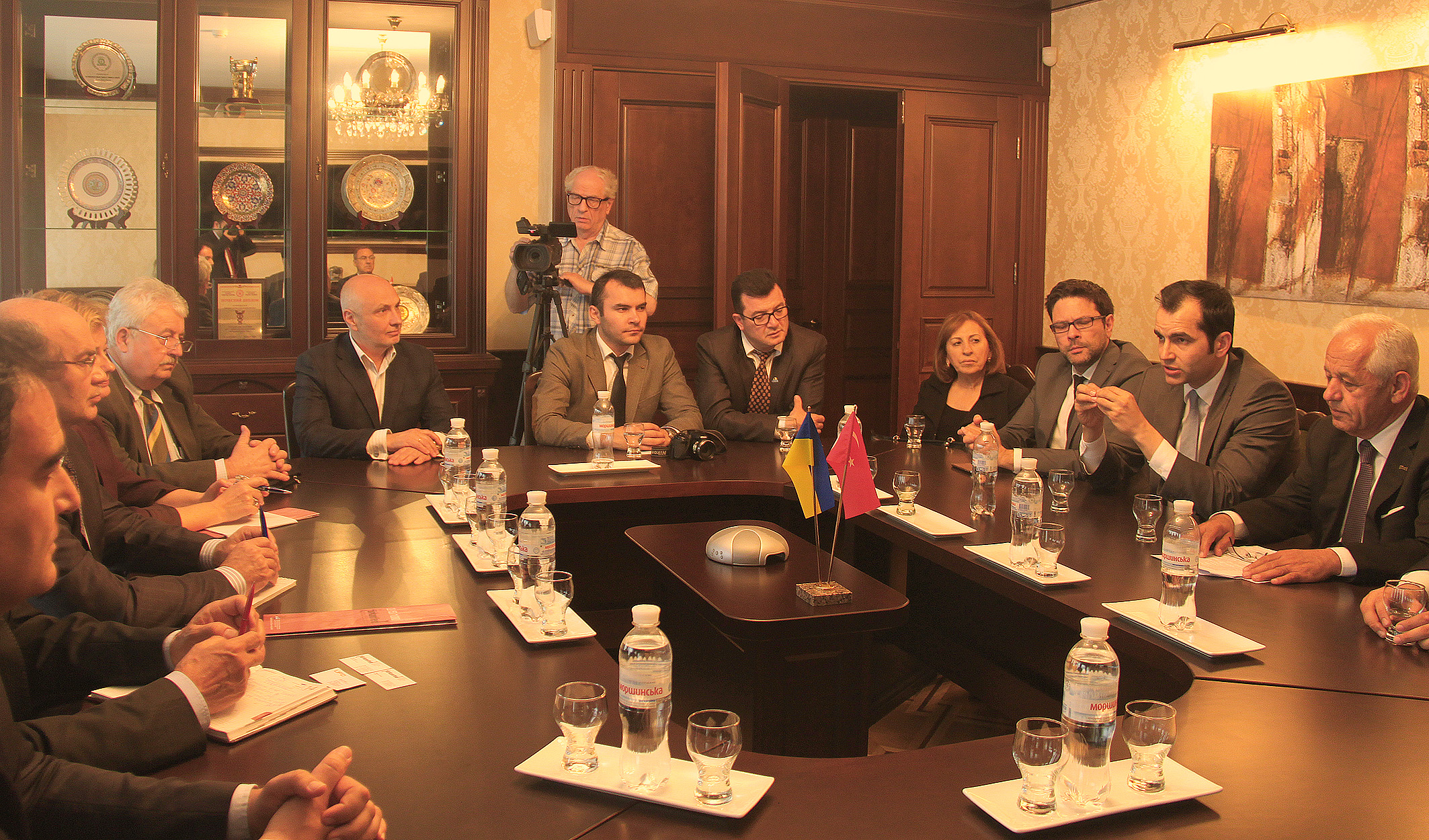 Süleyman Onatça, President of TÜRKONFED, said during his contacts that, TÜRKONFED which provides for 55% of employment excluding agriculture and public institutions with it members basis and realises 83% of the foreign trade of Turkey excluding energy, is an independent institution, out of politics. Mr. Onatça further indicated that, on the other side their Organisation is a party regarding matters such as achieving full democratisation in Turkey, membership of Turkey to the European Union, supremacy of law and increasing competition by supporting small and mid sized enterprises. Süleyman Onatça mentioned that Ukraine now has turned its route to Europe and made significant developments all those areas in short time. President of TÜRKONFED indicated that Turkey, having a Customs Union Agreement with European Union for a period of approximately 20 years, has had significant experiences during this process and will be pleased to share their positive and negative experiences with their Ukrainian counterparts. Süleyman Onatça mentioned that, for the Turkish business community, Ukraine is very important as a friend and neighbouring country and if consistency can be provided in the reforms in Ukraine, the amount of investments from Turkey to Ukraine will increase and specified that “the visit made by our President Mr. Erdoğan, to Ukraine on 20th of March, has been a green light for Turkish business for investments to be made in this country”. 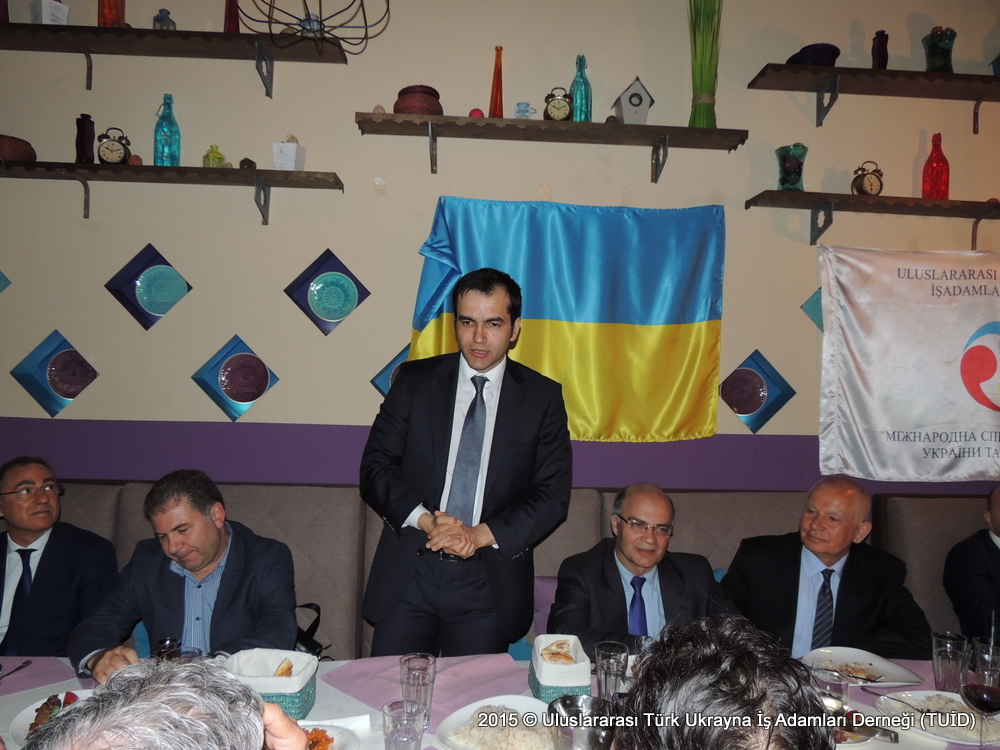 In the meeting made at EBA, its Executive Director Anna Derevianko mentioned that the reforms have been very important for the business community, that the recession in the Ukrainian economy could continue for a while, but this process may be an opportunity to make investments in niche areas and to prepare for investments to be made in the forthcoming period. Ms. Derevianko indicated that they place importance on commercial relations between Turkey and Ukraine and they are considering to pay a study visit to Turkey in the forthcoming term. During his visit to the Ukrainian Chamber of Industry and Commerce UCCI, its Vice President Valeriy Korol stressed that the representatives of the Turkish business community are very active in Ukraine and especially they have a broad cooperation with the Turkish Ukrainian Businessmen Association (TUID). Mr. Kolos stated that, among the business councils established with 33 different countries within the scope of their Chamber, the oldest one is the Council established with Turkey and this is a proof of the high level of importance they place on economic and trade relations with Turkey. Mr. Kolos further mentioned that they know achievements of Turkey in the fields of economic reforms, supporting small and mid sized enterprises, combating against trusts, strengthening banking system, investments in tourism, etc. and they want to have cooperation in those fields.

Burak Pehlivan, Vice President of TUİD, mentioned that more than 700 Turkish companies made investments in Ukraine reaching a total amount of approximately 2.5 billion USD and the Turkish construction companies completed projects with a worth of 4.5 billion USD in Ukraine until today, that “despite all economic problems in the country, Turkish companies continue to believe and invest in Ukraine and the latest examples of this notion have been by Turkish Airlines and LIFE, that furthermore visits from Turkey to Ukraine by TURKONFED with a highest level delegation show that investments will continue to increase in the forthcoming term depending on reforms in Ukraine”. 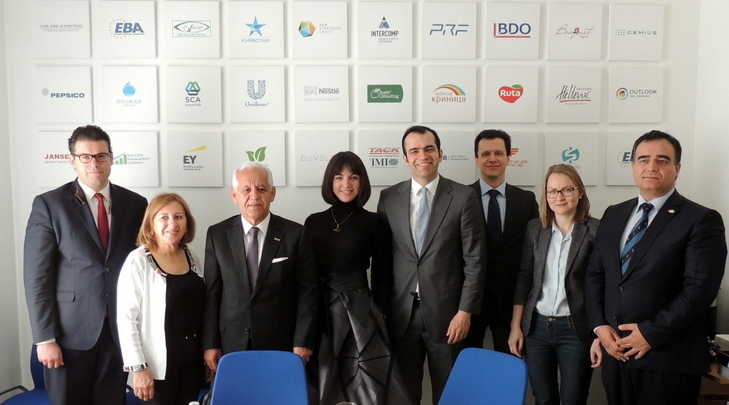 Giuseppe Laghezza Masci, President of the Italian Ukrainian Businessmen Association (AIU), participated to some meetings together with the delegation and indicated in said contacts, that that Turkish and Italian businessmen have similar characteristics and the AIU and TUİD have performed many joint organisations. Mr. Masci drew attention to the importance of support to be provided by foreign capital to the reform process in Ukraine, for economic development in the country and for the welfare of the people.