Burak Pehlivan: "Ukraine has vanquished 81 countries in the Doing Business rating. It is an immensely resulting. No other country could repeat such a success" 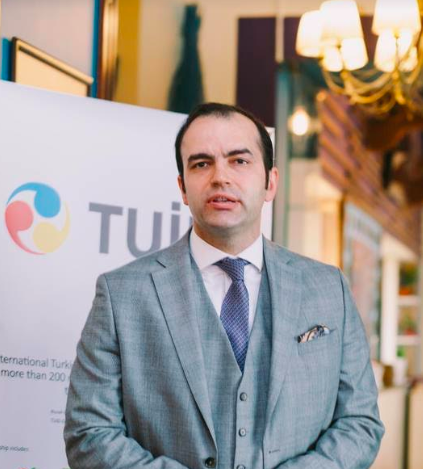 Burak Pehlivan, Chairman of the Board of the International Ukrainian Turkish Business Association, told how Turkey’s experience in economic advancement may be useful to Ukraine.

A Turkish businessman, who thoroughly and deeply analyzes the facts and events, as well as meticulously considers any item and does not make decisions on unverified information. This is the way, which Burak Pehlivan, who lives and works in Ukraine for more than 9 years, applies to his job and he is confident that our country has the potential to make Ukraine prosperous during the shortest time.

In a interview with LDaily, Burak told about the similarities between Ukraine and Turkey, especially in regard to the historical context, and how Ukraine can attract the flow of investments.

LD: Burak, please tell us, what is the interest of Turkey in Ukrainian business?

B.Pehlivan: If I answer your question briefly my curiosity is caused by the similarity of our countries. 20 years ago in Turkey there were the same problems that Ukraine is experiencing now: both political and geographic. We were not able to attract foreign investment in the same way as you are doing now, and Turkish goods in Europe were also considered uncompetitive. But 20 years ago (in 1995) Turkey signed an EU Customs Union Agreement with the EU, after which our country began to actively implement economic reforms for several years. And when Europe saw that Turkey was on the path to reform, started to come investment from EU, cumulatively 75% of all foreign direct investment in Turkey was brought by European investors. By now the share of external trade between the EU and Turkey is 48% of Turkey’s foreign trade. In addition, today our country exports 5 times more goods than 20 years ago, namely electronics, cars, and auto parts.

By the way, today Turkey produces 1.5 million cars, and many European car manufacturers have opened their plants in our country. Yes, we do not produce space rockets, but the production of consumer goods is very well developed.

LD: What is the market for Turkish goods?

B.Pehlivan: Turkey does not have oil and natural gas, which means that we need to produce something competitive and sell it somewhere, in the domestic market or abroad. The domestic market is relatively small, so we go outside, because it always offers new opportunities. Now our goods are supplied not only to the EU, but also to countries of Africa, Asia, Russia, Ukraine, and we still continue looking for new and new markets. Of course, for high competitiveness, the quality of manufactured goods should be at a high level. And our goods meet these requirements. But I want to emphasize that the impetus of growth out has been done more than 20 years ago, as I have already said, it was the Agreement on the Customs Union of Turkey with the EU. And that fact gave great opportunities for the development of the Turkish economy.

LD: Burak, tell us, please, what, in your opinion, taking into account all the facts mentioned above, Ukraine needs first of all?

B.Pehlivan: It`s a good question. There are many conversations on this subject, and the opinions of those who understand how the economy and business work are distinctive. The first half of them assures that at the moment Ukraine is not able to attract foreign investment due to a conflict with Russia, political and economic instability, because of great corruption, poorly organized social system. The second part insists that in the presence of all these problems, investors are still looking into Ukraine, because there is a convenient geographical location and a very good economic potential. And again, I want to give an example of Turkey: why, for example, after the signing of the Customs Union Union agreement with the EU, we could not attract investments for the first 5 years, and then it will be clear what Ukraine lacks.

Increasing of investment attractiveness is a long process aimed at informing the investor about the country’s opportunities. In addition, you can not hide the problem with the image. Yes, there is corruption in Ukraine, and investors know about it. But the fact is that corruption exists in Poland, Italy, and in other countries, and in Africa, too, but many large international companies go to Africa and successfully conduct their business there. Does this mean that there is a better level of government control than here? Of course not. The danger is exaggerated and result depends on both people and government.

For example, I am sure that time is coming when Ukraine becomes a developed and prosperous country, but speed of this process depends only on the Ukrainian people and government. Let’s look at the Turkish experience again. Does it mean that Ukraine should also wait for 5, 10 or 15 years? It is clear that not. Knowing the experience of other countries and having a desire to reform and develop, Ukraine can achieve high rates in its development much faster. Such a plan requires:

LD: Is international image so important?

B.Pehlivan: Yes, it is. And do you know why? Because if a country has a bad image, tourists will not go there because of negative information: they constantly heard that there was a war in Ukraine and a threat to their lives. Turkey also sometimes has problems, but it is one of the most popular tourist destinations in the world. And all because we work on our global image, we show our sights, tell about the advantages of cooperation with Turkey and opportunities for other countries.

In my opinion, Ukraine should sign an agreement with Turkey on the Free Trade Zone. Right now, Turkish investors are ready to invest abroad and Ukraine can become a very good hub for a Turkish manufacturer.

I can explain why: Ukraine has an agreement on the Free Trade Area with the EU and Canada, and your country is bordered by four European countries, which gives new logistical opportunities to all parties. And one more reason to sign such an agreement is when Europe sees that Turkey is actively investing in Ukraine, it can become a catalyst for the arrival of European investors here.

LD: How does the Ukrainian government respond to the proposal to sign the Free Trade Area Agreement?

B.Pehlivan: You know, such negotiations started in 2007. 11 years has passed. It`s too long. Each party wants to have the result, but it does not succeed yet. Now we are still conducting these negotiations, and I hope that in 2018, we will sign this agreement. Moreover, the sooner the document is signed, the faster and more actively Turkish investors go to Ukraine.

LD: What is the most perspective sphere of business for Turkish investors in Ukraine?

B.Pehlivan: Ukraine is very strong in heavy industry. But, like in many countries of the former Soviet Union, light industry is not well developed in Ukraine. And when we talk about light industry, it does not mean just textiles, it means all production besides the heavy industry.

LD: What should be done more to attract more foreign investment to Ukraine?

B.Pehlivan:  As I mentioned,  there is not enough communication with the investors. Ukraine should show more success stories in the World stage.

LD: It means that communicating with investors is one of the most important components, does not it?

B.Pehlivan: It is true. Communication is one of the key factors. Next to attract more investment especially for big infrastructure projects, Public Private Partnership (PPP) can play very important role. In Ukraine, one of the biggest problems is the lack of money. The banking system practically does not work, loans are not given. In Turkey over the past 15 years more than 200 projects have been implemented precisely thanks to a working PPP model. The amount of these projects has exceeded $ 150 billion. And all this is only through private funding. This case can be a great example for Ukraine.

The next point is -

to allow privatization. Thus, local or foreign private investors will have the opportunity to manage more efficiently and more productively, to upgrade and modernize the state owned enterprises and create new jobs.  Enterprises will start to generate profit and pay taxes.

LD: Burak, please tell us about the Association you headed, TUID?

B.Pehlivan: TUID – International Ukrainian Turkish Business Association was founded in 2004, when then our Prime Minister and today our President Erdoğan has visited Ukraine for the first time. He noticed that there was no Association of Turkish Businessmen in Ukraine, and advised to create it. Thus, Turkish businessmen founded TUID.

By the way, in February 2018 in Turkey, TUID was recognized as the most successful association of Turkish businessmen abroad. And we got the prize (smiles). And in 2012 in Romania, we have become the most successful Turkish Business Association in Eastern and Central Europe. In April 2018, in Poland TUID was defined and awarded as the big friend of Ukraine and Poland.

LD: What is the most important task of TUID?

LD: Burak, you have been working in Ukraine for 9 years. What, in your opinion, has changed over the years?

B.Pehlivan: You know, over the past 4 years Ukraine has implemented many reforms, even more than during the past 23 years of its Independence. In 2010, Ukraine ranked 157th in the Doing Business World Bank list. Now - 76. Ukraine has surpassed 81 countries in this ranking. It is extremely well. Nobody could repeat such a success. As a citizen of Turkey as well as a Turkish entrepreneur and a Turkish businessman who works in Ukraine, I see and feel the difference. Now you need to outrun 75 countries (smiles).

B.Pehlivan: When foreign investors choose where to invest, they estimate all countries, and not only those that have a positive development trend, although this is very important. Therefore, despite the fact that Ukraine is undertaking such enormous structural reforms, it could not attract investment. You need to work more and faster.

LD: What would you like to wish to our country and Ukrainians in particular?

B.Pehlivan: In my opinion, you have everything to reach the long-deserved prosperity.  But one must understand that Ukraine must be raised only by its citizens and thanks to God you have great human capital for it.  You just have to be a bit more organized and move quicker.