Burak Pehlivan: Erdoğan’s visit to Ukraine may be substantial milestone in relations between two countries 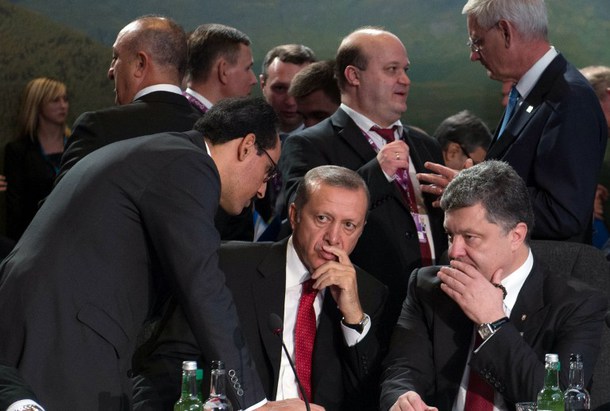 Turkish President Recep Tayyip Erdoğan will pay an official visit to Ukraine on March 20, with a broad delegation consisting of, among others, six major ministers from the cabinet and prominent businessmen of the country. This visit is considered as very important, because it shall be the first visit by high-ranking officials from Turkey to Ukraine, which intends to shape its future within the framework of unification with the European Union.

The new Ukrainian government is willing to develop its economic and political relations with, not only the EU and North American countries, but also with its neighbors, mainly Turkey, and with the countries in Middle East, Africa and Far East as well. Similarly, Turkey intends to further strengthen its current good relations with Ukraine, its neighboring country in the Black Sea region.

The High Level Strategic Cooperation Council, formed in 2011 and gathered each year between two countries at the level of prime ministers or presidents, could not convene in 2014 due to the intense economic and political agenda of Ukraine. The council shall also convene during this visit. Turkey established high level strategic cooperation councils with nearly 20 countries and the Ukraine council is the best performing council among them.

Developing and building up strong relations between Ukraine and Turkey in recent years in all of the economic, political, cultural and humanitarian fields, the meetings of the council and the decisions taken played a significant role, undoubtedly.

During the last 10 years, Turkey – with its EU candidate anchor and as a member of organizations like the Organization for Economic Cooperation and Development, NATO and G20 – could strongly attract foreign capital which it needed for its economic development.

The interest of the consolidating and growing Turkish private sector to invest in, especially neighboring countries, has increased. Therefore, investments in excess of $2.5 billion in total in Ukraine by more than 700 Turkish companies or construction works have been realized by Turkish construction companies in Ukraine, which include highways, five-star hotels, bridges, airports and stadiums.

Economic relations between two countries are at a significantly good level relatively when compared to the last two years, during which Ukraine encountered very difficult times economically. Despite the constriction in mutual trade volume in 2014, Turkey has become the country against which Ukraine has the highest amount of foreign trade surplus, with an amount of $2.5 billion.

Despite the economic crisis, Turkish companies maintained a significant part of their investments in Ukraine and Turkish Airlines, the flagship airlines company of Turkey, has been the first international airlines company initiating regular flights to Kherson after a 13-year cessation and also decided to fly directly from Istanbul to Zaporyzhia, which is another important city of Ukraine, at a time when many airlines companies decreased the number of their flights to or closed their offices in Ukraine.

Turkish Airlines is further in search of increasing the frequency of its other current flights to this country, mainly in the Kyiv-İstanbul line. Furthermore, the low cost Turkish airlines company Atlasjet, is waiting for flight permit as a Ukrainian company and other Turkish private airlines companies are connecting several cities such as Lviv, Odesa and Harkov, to İstanbul. Increasing and diversifying transportation means shall have exponential contribution to commerce and tourism.

Turkey continued to the number one tourism destination of Ukrainians in 2014. Although the number of visitors from Ukraine declined from 758,000 in 2013 to 650,000 in 2014, considering the crisis encountered and the fact that Donetsk and Simferopol airports could not be at service, the decline may be considered as quite reasonable.

During the first two months of 2015, there has been an increase of 3-4 percent in the number of Ukrainian tourists visiting Turkey when compared to the same period last year.

People of both countries having the opportunity to know each other better with reciprocal visits and we have witnessed a higher number of marriages last year. Also, the interest of Ukrainians is increasing every day in Turkish TV series. Although started recently, we are observing that the rich culture of Ukraine started to be known, appreciated more and more in Turkey, especially after the EuroMaidan events. Those cultural interactions reflect credit on political and economic relations, beyond any doubt.

Turkey, as an EU candidate country, has a Customs Union with Europe since 1996. Ukraine is very new in this process. Ukraine, having a large population like Turkey and lacking support of all member countries of the EU during its candidacy/membership process, may benefit from the similar experiences of Turkey. It may follow in the footsteps of Turkey, for the correct things it has done, and may refrain from repeating the mistakes made.

Visa requirements have been removed between Turkey and Ukraine mutually, as from August 2012 and afterwards, the period of staying without a visa, increased from 30 days to 60 days. Free movement of persons has had positive impact both on tourism and mutual trade.

The content and timing of the presidential visit, to be made by such a high profile and a broad delegation, is not by coincidence.

And the Turkish companies believe in the future of Ukraine and the targets of the new government such as combating against corruption, transparency, supremacy of law and generalisation of reforms and willing to invest more to the Ukrainian economy every year.

The most significant sample of this approach, has been undoubtedly the “3G” tender awarded to Astelit, major shareholder of which is Turkcell Holding, a Turkish company, last month in consideration for a price of 3 billion 355 million hryvnia as a result of transparent tender process, during this period when the crisis is at its peak. I hope, the developing trade volume between two countries and the Turkish companies in this country, will have a significant role in the promising future of Ukraine and increase in the welfare of the people in the country. Hopefully, this first important visit from Turkey after the European Maidan, will be good start of this process.

Turkey is a friend of Ukraine, not only in good days, but in difficult times as well.

I hope the developing trade volume between the two countries and the Turkish companies in this country will have a significant role in the promising future of Ukraine and an increase in the welfare of the people in the country.

Hopefully, this first important visit from Turkey after the EuroMaidan Revolution, will be good start of this process.